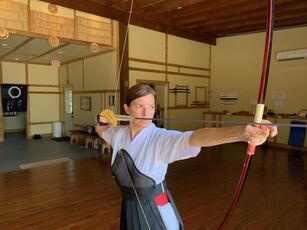 Kyudo (the Art of the Bow) is the oldest of the Japanese Martial Arts. The origin of the Bow dates back many thousands of years across the globe. In Japan, Bow artifacts dating to the Stone Age (Yayoi period) have been discovered. Hunting scenes drawn on early Bronze Age vessels, depict a long Bow with an off center grip. Furthermore, in the Chinese book Gishi-Wajin Den (record of the Wei biography of the Wajin) mentions that long Bows were used by the ancient Japanese. This description, along with what is written in the Kojiki (ancient chronicles of Japan), prove that the Bow had a significant meaning in the ancient Japanese world. It was and remains a symbol of dignity. Hence, it played an important role in Shinto and Samurai rituals in later years.
​ 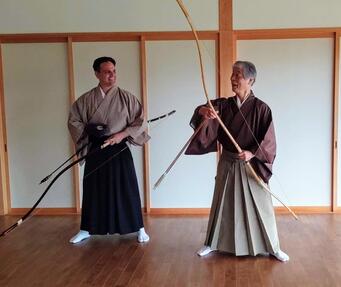 With Hashimoto Hanshi at his private Dojo in Mito Japan.
During the war-less Edo period (1603-1868) archery was pursued as an Art and developed into Kyudo (The Way of the Bow). Archery became obsolete as it was supplanted by modern firearms. Nevertheless, it was still practiced by samurai, gradually changing its character from kyujitsu (warfighting with a bow) to Kyudo, with its imperative of personal development. As the 20th century dawned, elements of the warrior and ceremonial styles were combined to create a hybrid form. In the 1930's it became evident that modern Kyudo would need to be standardized in some way to guarantee its continued growth.   After WW II, all Martial Arts training except Kyudo was banned until 1951. The All Nippon Kyudo Federation (ANKF) was created in 1949 for the purpose of promoting and developing Kyudo in Japan. In 2006 the International Kyudo Federation (IKYF) was formed to promote Kyudo internationally.

The supreme goal of Kyudo is the state of Shin-Zen-Bi or Truth-Goodness-Beauty. This can be approximated as: When archers shoot correctly (truthfully) with virtuous spirit and attitude towards everything and everybody (goodness), beautiful shooting realizes itself naturally. 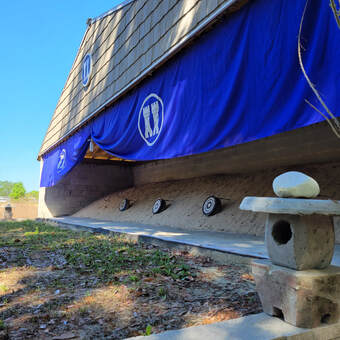 ​Recommended Reading: Zen in the Art of Archery -by Eugene Herringel
The essence and practice of Japanese Archery- by Hideharu Onuma and Dan Deprospero
​
Recommended Film: One Shot, One life.- by empty mind films

​“He who has a hundred miles to walk should reckon ninety as half the journey”
-Eugen Herrigel, Zen in the Art of Archery

"In the Archer, there is a resemblance to the gentleman. When he misses the mark, he turns and seeks the reason for the failure in himself."
​-Confucius